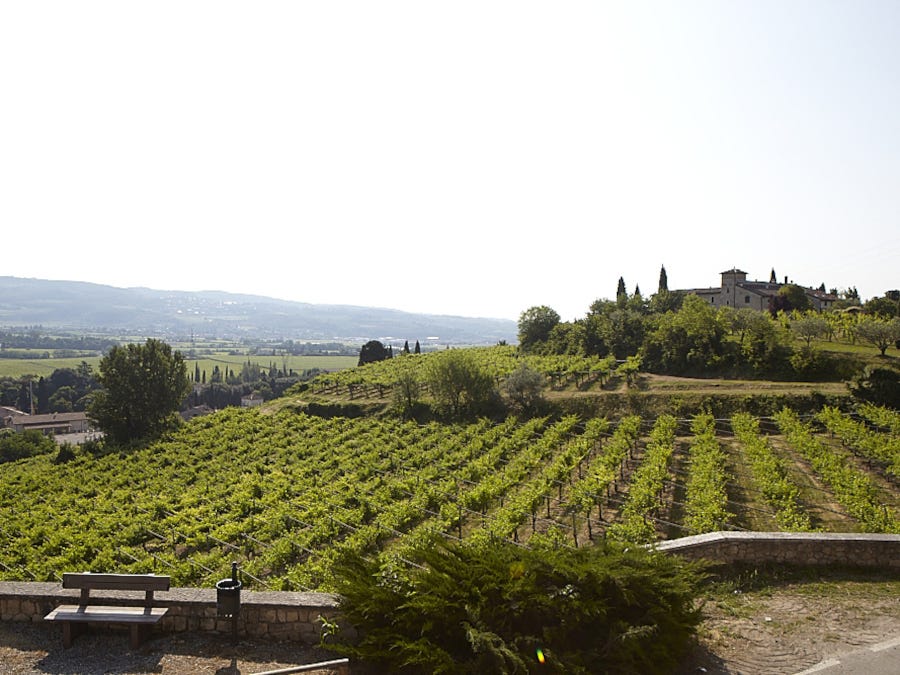 Gerardo Cesari: For the love of Veneto

Replete with a rich cultural heritage and breathtaking landscapes, Veneto also stands out for its winemaking. Thanks to its unique techniques, the region has built an excellent international reputation.

In 1936, Gerardo Cesari chose the bucolic Valpolicella valley, north of Verona, to establish his winery. Dotted with emerald hills, the commune in which the vineyard is located lies at the heart of the classic Valpolicella region, which produces emblematic and unmistakable Amarone wines. While Cesari has made these reds its specialty, the estate endeavours to produce wines that rival Italy’s finest offerings.

Amarone della Valpolicella is among Italy’s prestigious Denominazione di Origine Controllata e Garantita (DOCG) wines produced using the appassimento technique, which consists in letting the grapes (mainly corvina, rondinella and molinara) dehydrate naturally on the trellises to concentrate the sugars and aromas, fermenting them slowly over 40 to 50 days and then transferring the wine to barrels to age. Amarone wines have a high alcohol content (up to 16% or 17%) and are quite dry and highly complex.

Considered a pioneer in Veneto, Cesari has played a leading role in raising the profile of Amarone around the world. In the 1970s, the wine was still considered a local specialty and remained little known outside the region. Through hard work and passion, Franco Cesari, the son of the winery’s founder, has brought Cesari Amarone to shelves and cellars on five continents and made it one of the first Italian wines to achieve this feat!

This year, Gerardo Cesari celebrates its 85th anniversary. Since its founding, the estate has expanded to four vineyards over 100 hectares of land. Building on the know-how they have gained since the winery’s beginnings, the members of Gerardo Cesari’s family, who are still at the helm, combine technical innovation and integrated viticulture to release elegant and refined wines.

While it specializes, first and foremost, in the art of Amarone, Gerardo Cesari offers a range of excellent wines. Here are eight labels that reveal the very essence of the Veneto terroirs.

Ripasso designates wines that have been re-passed or double-processed by fermenting with a pomace of grape skins from Amarone. The result is an aromatic, balanced and gourmand wine with notes of woods, black fruit and spices. These wines are delicious with red meat and aged cheeses.

A bold ripasso for grilled fare

This Ripasso’s enchanting notes of sandalwood, cacao and stewed fruits are delightfully complex. Round and hearty, the wine gets its structure from its tannins and acidity. Pour in good company alongside grilled meat, stew or game.

You’ll never go wrong with this Pinot Grigio—the region’s emblematic white. Lively, fresh and straightforward, it is the summer wine par excellence. Its notes of apple, pear and florals make it ideal before dinner, as well as with a roasted vegetable salad or fish.

Flavourful and affordable, Cesari Jùsto Veneto 2018 is a supple and very fruity red. The light appassimento process, which is quicker than the one used for Amarone, imparts a charming jammy quality. An excellent value, it complements a wide array of dishes, including grilled pork chops with smoked paprika. Bon appétit!

The Jema 2015 is 100% Corvina, a red variety from Veneto that is especially well suited to the appassimento process. Rich, balanced and incredibly fruity, the wine has notes of spices, jammy fruits and tobacco. Its complexity suits fine dishes for special occasions.

A complex and seductive profile

This blend of Corvina, Rondinella and Molinara—the three most popular varieties in the Valpolicella region—impresses with its roasted aromas and notes of mild spices, stewed fruits and tobacco in a profile that is as complex as it is enticing. Make it memorable with a plate of osso buco!

This exceptional Amarone blends aromas of woods, black fruit and cacao. On the palate, its texture has a charming velvetiness. The wine’s long-lasting aromas prolong pleasure, particularly with red meat, game or aged cheeses.

It deftly balances acidity and suppleness, making it perfect to serve chilled on a nice summer day. The nose gives off aromas of peach, pear and grapefruit, with a pleasant floral touch. A true delight with risotto!