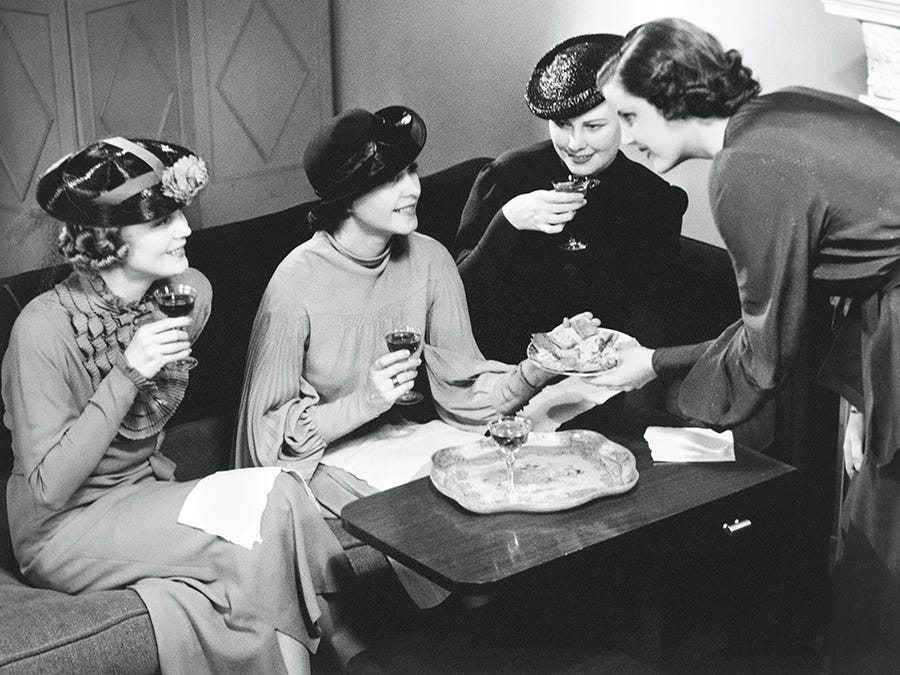 100 years of history between women and alcohol in Quebec

History reveals that the relationship between women and alcohol had quite its ups and downs. Let’s go back in time and take a closer look at this evolution!

When you consider the number of informed female consumers, alcohol producers, and sommeliers in Quebec nowadays, it would be easy to believe that their relationship with the “divine bottle” is relatively fair, regardless of gender. This, however, was not always the case. History reveals that the relationship between women and alcohol had quite its ups and downs. Let’s go back in time and take a closer look at this evolution!

For a long time, women were thought of as vulnerable “creatures,” both physically and emotionally. This was based on a very ancient belief that physiological balance was based on “moods” naturally present in the human body and whose proportions varied depending on age and gender. In the 17th and 18th centuries, New France residents went along with this way of thinking: these beliefs even existed among our ancestors from the Saint-Lawrence Valley!

Under this belief, alcohol consumption was seen as a means to rebalance moods, particularly by regulating the body’s temperature. But people had to drink accordingly, that is, based on their gender and age. Darker, stronger drinks, like very bitter beer, dark reds that stain, and robust brandies, seemed more appropriate for the male gullet. Women, on the other hand, were invited to opt for more delicate beverages, such as clear wines, alternating with water. Beer and brandy were allowed for older women and those who were ill.

But even when choosing the right drink, consumption by women was closely monitored. It was best for them to abstain from warming their blood with large quantities of alcohol. Better yet, they could just do without! The underlying fear was that women would get so drunk that they would lose their dignity: it was thought that they would not know how to recognize their limits. In short, female drunkenness was seen as a potential threat to the woman herself and to social order…

Because women and alcohol seemingly did not go together, it should be no surprise that women were generally left out of the production and business side of drinks. There were some female cabaret-keepers in cities, particularly in Montréal, Trois-Rivières, and Québec, as well as in certain villages, but this “career choice” was not well seen. Robert-Lionel Séguin, a historian from the last century, even referred to cabarets as a place of “poor morals,” which says a lot!

This way of thinking had a lasting impact on how society viewed alcohol consumption by women, with both heathcare professionals and judicial officers contributing to these beliefs. In several 19th-century and early 20th-century papers, alcohol consumption by women was literally demonized: it was reportedly the reason behind many societal problems, including prostitution, low birth rates, physical and intellectual deficiencies in children, juvenile delinquency, and so on. This was the argument that would emerge in various prohibitionist waves to surge in western countries.

It was in this heated context that the Commission des liqueurs was created in 1921. The establishment of respectable places to buy alcohol would eventually come to accept the presence of women in this sphere of consumption: many of them would visit the Commission (and the Régie des alcools after 1961) to get bottles to bring home, as busy husbands would send their spouses there to buy the necessary bottle of “gros gin”!

The ways in which women drank remained very modest and private up until the 1970s. And needless to say, it was exceptionally rare to see women involved in drinks business and production.

Although they were allowed to drink alcohol at home or at the restaurant, some doors remained firmly closed to women for a large part of the 20th century, particularly taverns. In Quebec, taverns were exclusively reserved to men: women were most definitely not welcome! It was the Maurice Duplessis government that prohibited access to women in 1937, under the pretence that it was not an appropriate place for them. Not to mention the powerful “territorial” component associated with the exclusion of women. For customers, forced to listen to their boss at work and their wife at home, the tavern was the ultimate bastion of freedom… The very thought of letting women into taverns was therefore met with great resistance.

At the end of the 1970s, the Quebec government decided to make changes to the law, so as to reflect the many social, economic, and cultural changes. The Act respecting offences relating to alcoholic beverages allowed tavern owners to serve a female clientele if they so desired. “Ladies welcome” signs were hung above the door of certain establishments. For taverns that opened prior to 1979, however, it was left up to the establishment’s discretion whether or not to accept women. Finally, in 1986, the law was amended so as to prohibit the exclusion of women!

From female consumers to producers and specialists

Once they had legitimately carved out their place as consumers, both in private and in public, what role did women play in the production process and alcohol industry in Quebec?

Long kept out of wort boilers and wineries, and the beverage industry in general (with the exception of cabaret-keepers of the New France era), women are now key players in the sector. As such, Quebec women are showing a growing interest in beer: whereas we could once count female crafters on the fingers of one hand about ten years prior, many of them are now crafting beers with terroir notes. A growing number of women are now also present in the cider industry. Quebec viticulture also came to include various female winemakers in its ranks over the past few decades, with vineyards multiplying in several regions. The microbrewery sector, however, remains widely dominated by men.

In addition to producers, there are also women in specialty areas, such as sommelier, œnology, and mixology, as well as reporting, critics, copywriting – all traditionally male-dominated fields. Having female authors for wine, beer, and other alcoholic beverage guides is now common practice. Several women are also part of Quebec’s media, hosting reports on wine and spirits. More and more women are becoming wine connoisseurs: in fact, Quebec has the highest number of female sommeliers in the world! Some of them are even internationally renowned, their seasoned taste buds having allowed them to take to the podium of various prestigious competitions. How can we explain this wonderful phenomenon? The fact that Quebecois’ interest in wine is relatively new, rather than imprinted in a long-standing male-dominated tradition, no doubt has something to do with it…

There is a beautiful story behind the cheerful toast among girlfriends, the crafter inviting you to discover her most recent creation, and the sommelier sharing her knowledge with you. Cheers to progress!