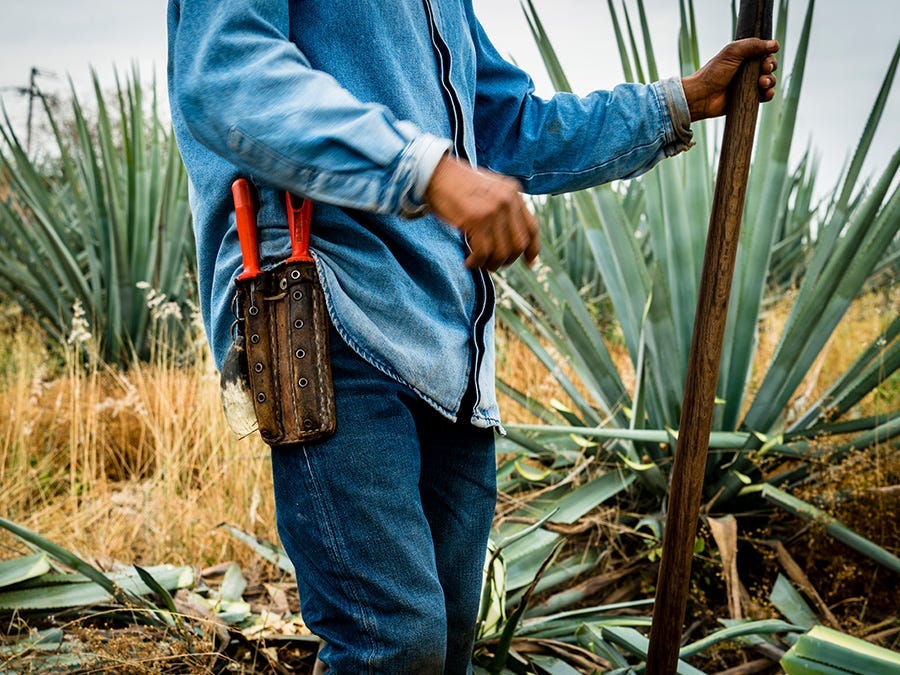 Beyond the Margarita, the popularity of this Mexican gem comes in many great varieties.

For far too long, in North America, tequila and mezcal have been known as spirits served in shot glasses, with lemon and salt, their strong flavour making you want to down them quickly, followed by a long sip of beer. Thankfully, as their popularity grew this past decade, it became possible to discover much more refined versions of these spirits made from agave, a succulent plant that grows in the deserts or semi-deserts of Mexico.

Various celebrities saw an opportunity in the growing popularity of these peppery drinks, whereas most leading spirit production groups have acquired tequila or mezcal brands over the past few years. The most well-known case remains that of George Clooney, who founded Casamigos with two investor friends of his. This personal project was created in 2013 and sold to giant Diageo for $1B in 2017.

If the vast majority of tequila is still used for margaritas – the popular cocktail made with tequila, lime juice, and citrus liqueur – aged and expressive versions from specific territories or made with rare varieties of agave, using ancestral methods, are now making their way into the best bars. High-end mezcals are good for sipping just like the finest of whiskeys, and they come in an impressive variety featuring smoky, spiced, vegetal, and fruity notes. There is a wide range of flavours for those who want to explore this world of age-old traditions.

In fact, the production of alcohol from agave dates back more than 3,000 years, when the populations of Mexico and Central America were already fermenting pulque, a type of agave-based beer that was used specifically in the religious rituals of major civilizations, like the Mayans or the Aztecs. After their arrival in the 16th century, the Spaniards used agave to give them something to drink, with wine from their country being more difficult to get their hands on on this side of this Atlantic. In the 17th century, the first official mezcal distilleries came to be, before the Cuervo and Sauzal families – still big names in the world of tequila – began producing them on a broad scale and starting an international venture.

From cooking to distillation

Mezcal and tequila starts with harvesting agave hearts, which can take up to 10, if not 20 or 25 years to reach maturity, before cooking them over fire or by steam to help soften them and extract their sugars. The flesh of the agave is then crushed and fermented before being distilled and sometimes aged in barrels. The old-fashioned methods, which required work by hand, the use of native yeasts, and ovens or pot stills, for instance, are still very valued, even if most production nowadays uses large-scale industrial approaches.

Tequila and mezcal are often classified as two distinctive spirit categories, but they are spun from the same cloth. Tequila is actually a specific category of mezcal, produced exclusively from Weber blue agave, in the Mexican state of Jalisco and some neighbouring states. Note that the blue agave variety may be the only one used, but that doesn’t necessarily mean it is the only source of sugar. If the tequila in question does not have the “100% agave” mention on its label, it may also contain cane sugar or other sources of sugar, representing up to 49% of its content.

Mezcal, which is produced in various parts of Mexico, can be made using some 50 different varieties of agave, offering a different profile depending on the variety, be it Espadin (the most common variety), Tepeztate, Arroqueno, Cuishe, or the exceptional Tobala, a wild variety that is increasingly rare and in demand. Being in drier or damper regions can also affect the agave’s flavours, from one mezcal to another.

Tequila and mezcal are controlled appellations exclusive to Mexico, and supervised by regulating organizations, with a whole government regulation as its base. There are agave-based spirits produced outside Mexico, which cannot have the same name as their Mexican equivalent. Other similar alcohols are made from sotol, cousin of the agave plant, which is especially popular in Northern Mexico and Southwest Texas.

Tequila and mezcal are classified based on aging (or lack thereof) of the spirit after its distillation. One part of the production is aged in barrels, giving them new aromas and a rather golden colour.

Blanco (or Silver). Clear tequila or mezcal that has not been aged by fermentation. The most common style.

Joven (or Gold). Tequila or mezcal that has undergone some aging, or a blend of blanco and aged spirit. Caramel or oak extract to enhance its flavour and colour.

Reposado. Tequila or mezcal that has “rested” at least two months (but no more than a year) in oak barrels.

Añejo. Tequila or mezcal that has spent at least one year in an oak barrel with a maximum capacity of 600 litres. The extra Añejo can stay up to three years in barrels.

Mezcal can also be classified based on its manufacturing process, for artisanal and ancestral mezcal. For example, whereas plain mezcal can use agave hearts cooked in huge autoclaves, the other two versions are roasted in traditional ovens.  In the case of ancestral mezcal, it needs to be distilled in a pot still heated directly over the fire.

When it comes to cocktails, the margarita remains a staple tequila-based concoction. There are various stories and legends relating to its origins, from Tijuana to Acapulco, but it is omnipresent, even in machines that make iced versions, visible even in the hottest bars. The sweet flavours this cocktail is traditionally known for has recently been swapped for a spicier version.

However, there’s a lot more ways to use the various flavours of tequila and mezcal. If citrus is often used to balance out the peppery and spicy notes of agave alcohols, tropical fruit like mango or guava can also do the job. Blending tequila or mezcal with sherry or amaros can also make for surprisingly complex cocktails.

You can also use mezcal instead of gin or whisky in classics like a Negroni, Manhattan, or Old Fashioned for expressive versions with smoky and spiced notes. A Bloody Mary can also take on a whole new dimension when made with mezcal and Mexican peppers.

Tequila and mezcal can also be served with food, with a surprising variety of potential pairings. The white versions, livelier and with energetic notes, pair especially well with marinated fish such as ceviche or fish tacos. Grilled and spicy (and flambéed in tequila, why not?) shrimp also create a nice balance thanks to their sweet flesh. Salads with citrus fruits (think grapefruit) and other acidic ingredients (e.g., salsa, salty corn chips) are also great options. Tropical fruit such as mango or papaya sprinkled with chili also make for a great pairing.

When it comes to reposados, and especially añejo, the notes created by barrel aging allow for nice meat pairings, especially smoked meats and barbecue spices, as well as chicken with mole sauce, a traditional chocolate hot sauce. Often marked by pronounced smoky notes, mezcal also pairs nicely with these items.

Some even go so far as to pair it with dessert. The roundness of añejo pairs nicely with dark chocolate and caramels, and lighter tequilas are great with tropical fruit… So bottoms up!

Some tequila-based cocktails to try

Discover all our tequila and mezcal