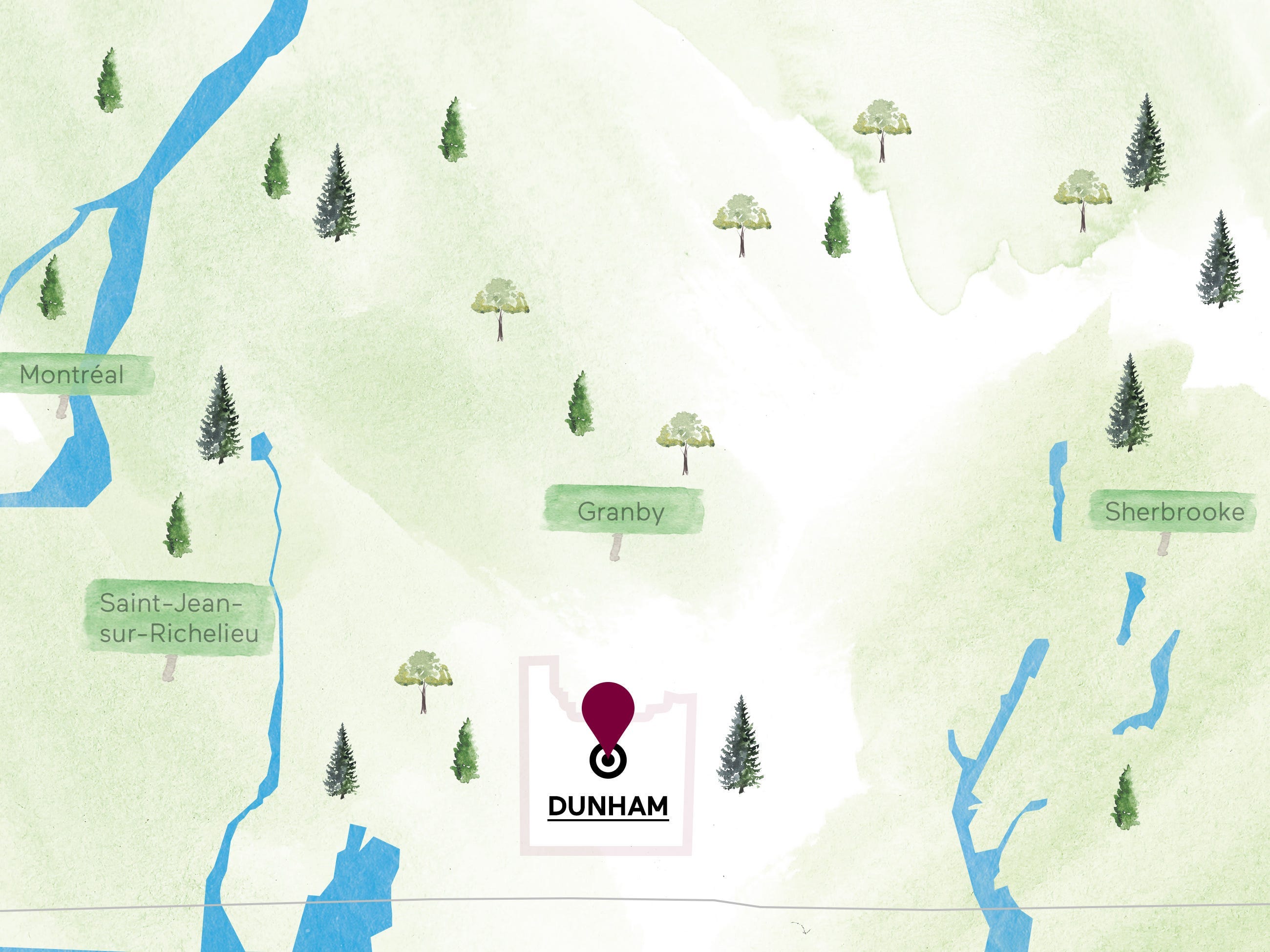 Cradle of Quebec winemaking, the region of Dunham is home to many fantastic producers and artisans, and such talent concentration is no coincidence: the environment is a key factor.

Located some 10 kilometers north of the US border, it is part of what we call the “Appalachian Piedmont”. From Sutton to Lake Champlain, the hilly landscape rolling off the mountains bring the necessary slope variations for proper vine irrigation and better exposure to sunlight.

The importance of water…

The region enjoys the salvaging thermal regulation brought on by Missisquoi Bay, the northern portion of Lake Champlain. Good to know; the water masses remain cooler than the air during springtime, which delays vine blossoming. The risk of the buds getting “charred” by early-spring frost is then more limited.

The reverse phenomenon will occur in fall: water will remain warmer than the surrounding air, extending the growing season by a couple of days, usually quite beneficial to obtain full fruit maturity. The same principal applies to vine emancipation on the vineyards of Niagara Peninsula, near Lake Ontario.

When speaking of heat in viticulture, we use the language of “growing degree days” (GDD) which add up during the growing season. In a nutshell: we add all the degrees over the base of 10°C (heat summation). This is what will guide, among different factors, the choice of variety used from one region to another. For Dunham, the cumulative GDD is 1,250 on average. For reference, you’ll find the equivalent GDD in Beaune, Burgundy, or in Marlborough, New Zealand… while Champagne will barely reach the 1,000 range. So, let’s stop thinking our summers are to cold for quality viticulture!

When talking terroir, we also include soils and sub-soils. The region of Dunham is characterised by glacier deposits. The land is also made up of clay, silty sands, schist and slate. Côtes d’Ardoise (slate in French) is part of the region and fronts these elements on its main building façade. Near this vineyard is also the famous Orpailleur, one of the most known and a pioneer of Quebec’s viticulture, as well as Gagliano, its next-door neighbour.

Don’t forget about them apples!

Dunham is home to other agriculture beyond vines. Apple growing was already part of the landscape. And because many artisans skillfully work both sides, you absolutely must add to your list of producers to discover the talented Château de Cartes, Union Libre and Val Caudalies. On top of their delicious wines, they all sign tasty ciders of all types and even beautiful high-end vermouths.