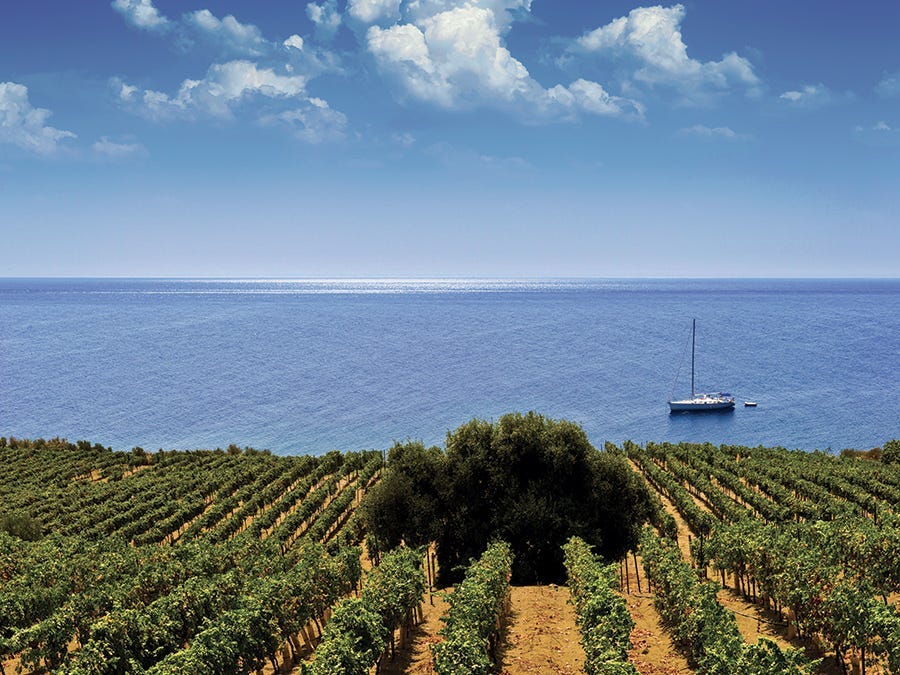 Whether from Îles de la Madeleine, Corsica, New-Zealand… all island people will all tell you they’re unique! Sicily, the largest Mediterranean island, is no exception and has plenty to brag about: geography, culture and of course, gastronomy. Wine also plays an important role in the island’s enviable reputation.

In these uncertain times, who doesn’t dream of escaping to such sun-filled landscape, relaxing to the sound of waves?

Diverse and featuring a strong personality, they are set apart by the uniqueness of their native varietals, the essence of which is often revealed through organic farming. In these uncertain times, who doesn’t dream of escaping to such sun-filled landscape, relaxing to the sound of waves? And while travel plans are halted, you can at least find a little part of this beautiful land in your glass, thanks to its accessible and novel wines. Welcome to Sicily, a paradise between mountains and sea.

Surrounded by water even if the continent remains accessible, the region is tinged with the legacy of past civilizations through the centuries. The island, home to in turn Greek, Byzantine, Arab and Spanish cultures, was from the onset the breadbasket of Roman civilization through its remarkable territorial expansion during antiquity. As breathtakingly charming as it is fertile, Sicily has always been one of the most coveted land through the centuries… with good reason!

The island is captivating and intriguing on all levels! In fact, its flag is graced with a three-legged gorgon, representing the three island tips responsible for its triangular shape. Cradled by the Mediterranean and enjoying the mild weather found in altitude, it also benefits from the dry heat of the Sirocco, a wind from Africa. The island also knows important seismic activity, moved by its position straddling the Eurasian and African geological plates.  This is what explains the hilly, sometimes flat-out (pun intended) mountainous landscape. The Etna volcano, located in the north-east part of the island, is believed to be the largest active one in Europe.

Of the many advantages found in Sicily, one of them is the mild climate which significantly minimizes the pressure of certain vine diseases. Days generously filled with sunshine and lands dried by abundant winds mean fewer chemical treatments are required to maintain green and healthy vineyards. As the first Italian region dedicated to organic agriculture, Sicily adopted a vine “police” by creating the Consorzio di Tutela Vini Sicilia DOC, a consortium responsible for the conservation and promotion of the island’s wine heritage. Old and young winegrowers offer high quality wines made from novel grape varieties that are true to, and above all, reveal their birth terroir. Vines never needed a human hand to grow and the Sicilians quickly realized that by focussing their care on the earth and letting it express itself; the fruits will reward them.

As the first Italian region dedicated to organic agriculture, Sicily adopted a vine “police” by creating the Consorzio di Tutela Vini Sicilia DOC, a consortium responsible for the conservation and promotion of the island’s wine heritage.

Well-aware of the quality potential of its vineyards, and on a mission to officialise its recognition, Sicily acquired the Sicilia DOC designation of origin in 2011; an equivalent to the French AOC (AOP). By doing so, the island’s best productions were guided and helped to guarantee consistency, a great way to make local varietals shine! Even if the island is a great host for international grapes (you’ll find Chardonnay and Syrah, to name a few), you simply must get acquainted with Grillo, a native variety behind stunning whites of undeniable freshness and fruit.

Lucido, widely known as Catarratto, is just as intriguing and capable of refreshing and mineral cuvées, or even incredible depth and density from top producers. Nero d’Avola, king of all on the island, is also a must if you haven’t tried it yet. When well-mastered, the variety yields wines featuring a bouquet of fruits and spices, with floral notes in young cuvées, capable of winning over the pickiest palates. As for Frappato, fiery and full of fruit, it will please fans of easy-drinking, juicy reds deprived of anything woody. The wine equivalent of candy!

Now more than ever is the time to open your door to the treasures of an island blessed with all the charms required to satisfy the Quebec “Latin” palates and sensitivity to products respectful of the environment.

This article was written in collaboration with Wines of Sicilia DOC.