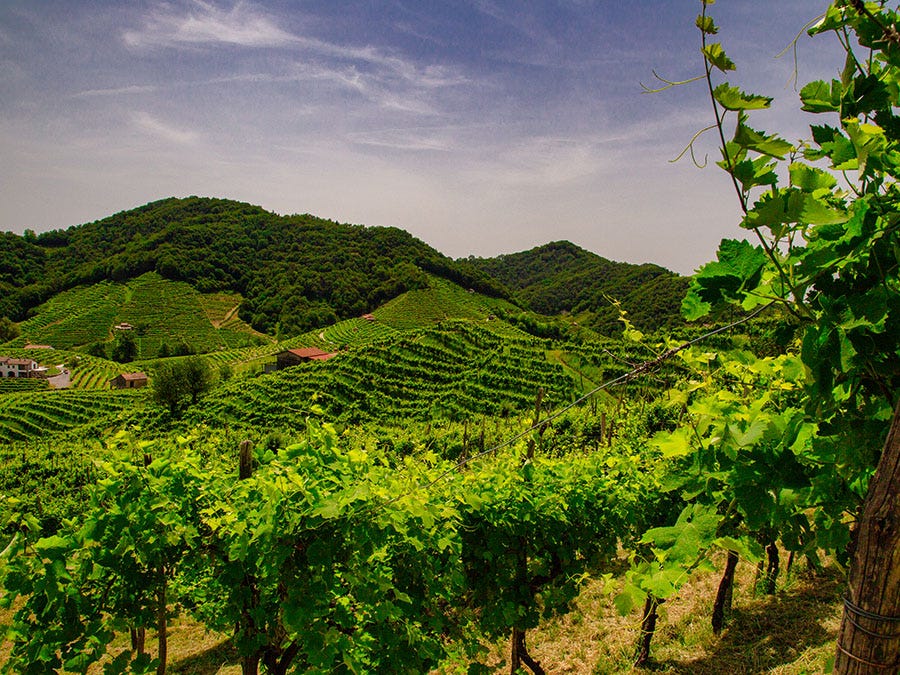 At the very least, you could say that Venento has the proverbial wind in its sails: the region has become Italy’s most important winemaking location—both in terms of number of hectares and for the volume of wine it produces yearly (appellations and local wines combined). One in every six bottles of Italian wine has come from Veneto—and small wonder, it’s renowned for its accessible and versatile wines! The region’s wineries are generally clustered around Treviso and Verona, and close to Lake Garde. The most-bottled appellations are Soave and Valpolicella, as well as Prosecco and Pinot Grigio, the latter two of which have experienced a 60% increase in production since 2000. Veneto is also no stranger to producing vintages with finesse, like Amarones, and local wines that are strong and complex, as well as excellent sweet wine, Reciotos (Recioto­-di-­soave or Recioto-­della-­valpolicella), and wine products made from dried grapes.

Veneto red wine production is dominated by the mighty Corvina; sometimes bottled alone, but more often in blends with Rondinella and Molinara, and less frequently with Rossignola, Trentina, Negrara Trentina, Marzemino. Very rarely Corvina appears in blends with Barbera or Sangiovese—the latter two of which cannot exceed 15—20% of the overall blend, in large appellations such as Valpolicella or Bardolino. As a general rule, Corvina et al produce wines with lively small fruit aromas (often cherries or plums), alongside a good dose of tobacco or spices. Amarone—the most prestigious of wines made with these grapes—provides exceptional depth. In Veneto, Bordeaux cepages like Cabernet Sauvignon, Merlot and Cabernet Franc have been present for more than a century, giving a significant head start to winemakers who wanted to launch themselves on the international market with such local wines as Merlot­-delle-venezie, which has solid quality-price ratio.

Even if well-known cepages like Chardonnay, Riesling or Malvoisie find their homes here, most consider quintessential Veneto wines to be Garganega, Glera and Pinot Grigio. Garganega is main cepage of Soave—one of the largest white wine appellations in Italy. Glera is well known for giving us Prosecco—the sparkling wine whose global popularity just keeps on growing. Pinot Grigio, grown outside of primary appellations, has also become a significant international success, making fresh wines that often taste of fresh apple, and even apple pie!

And on the table…?

In addition to being Italy’s largest winegrowing region, Veneto is also a major food production hub. Moisture-rich fields and lands produce rice, wheat, corn, and legumes—the main ingredients for Italy’s most universally popular meals: risotto, polenta, pasta e fagioli, to name but a few! In Venice, fish and seafood are highlighted; but it’s sardines that steal the spotlight, particular sarde in soar, a unique mixture of vinegar and onions. Braise rabbit and game meats are also excellent when paired with wines from the region. Don’t forget cheeses! None other than Grana Padano and Asiago are the dairy industry’s beloved cheeses.